The world of roller skating

Is Your Skating World Divided: Quads vs. Inlines? 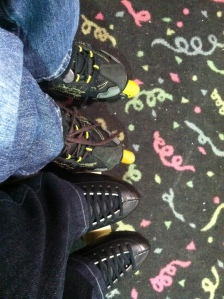 I was thinking about this question the other day. Is the skating world divided? The quad roller skaters vs. the inline skaters. If I had to choose between the two, hands down it would be quads. I’m a quad roller skating gal! I was introduced to the quad wheel motion first and I’ve stuck with it. I remember in the early 90’s when rollerblading first became extremely popular as an outdoor recreation. But, I must say I was surprised to see it emerge onto the scene of indoor roller skating rinks.

I introduced my son to roller skating on quads at the age of 3 and he took to it like a fish to water. Needless to say that brought a Kool-aid smile to my face. It feels good to have introduced him to an activity that I’ve been doing all my life and now I can pass the experience onto him. He will have great memories of us doing one of our favorite pastimes together. My son is 9 years old now and he will still hold my hand and skate with me, that is until a fast tempo song comes on that he wants to zoom around the rink to as if he was competing in the Olympic trials for speed skating.

Oh yeah, I forgot to mention that my son has since traded in his quad skates for inline skates… OMG! “What is he doing,” I thought? At first I was taken aback that he crossed over to inline skates. Didn’t he know we were the mom and son “quad skating dynamic duo?!” My son politely shared with me that he enjoyed inline skating more. But he proudly said, “Mom, I now know how to skate on quads and inlines!” He had a point, because his dear old mom had never tired to skate with inline skates before. I’ve ice skated a few times, so I’ve experienced the whole balancing act that one needs in order to stand up on a single blade or a single line of wheels.

Personally, I think quad rollerskating and inline skating have two distinctively different rhythms and flow. Quad skaters have a cool, roll-bounce artistic rhythm and inline skaters have a need-for-speed, sports-based vibe. This is strictly through my own observation of inline skaters over the years. As I mentioned earlier, I’ve never inline skated before. The cool part to all of this is that with recreational-, speed-, figure- and other roller skating styles, both type of skates are popular. So, I think we can expect that both inline and quad skates will stay around for a while. How do you feel about quad roll skating vs. inline skating? Let me know what you think…roll bounce, baby!

6 comments on “Is Your Skating World Divided: Quads vs. Inlines?”