The world of roller skating

These days you simply go to the skating rink, put roller skates on your feet and you’re ready for some roller skating fun. But in the “Olden Days” it wasn’t quite so simple.

In 1790, Belgian inventor Joseph Merlin introduced the first patented roller skate and what a memorable introduction! He wore his new skates to a party in London where he crashed into a very expensive mirror. Needless to say he wasn’t interested in skating after that. 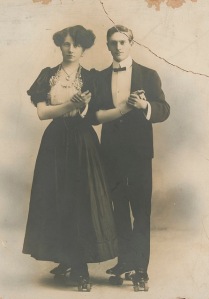 Nevertheless, other inventors came up with different roller skate models, most with in-line wheels similar to today’s rollerblades. A little over 100 years later in 1863, a businessman from Massachusetts named James Plimpton, invented a roller skate that could actually turn (Gee! what took so long?). This was the first four-wheeled turning roller skate. This design allowed people to skate curves and turns unlike the earlier skates that only let you move in a straight line.

Plimpton also opened the first public skating rink in New York, where gentlemen enjoyed “showing-off” for the ladies by doing fancy spins, steps and turns (they still do this today!) . The more the public saw of roller skating, the more they wanted to try it themselves. Roller skating had become a popular pastime for men and women.

As roller skating was becoming more popular, people would develop differing ideas on skate designs. In 1876, the toe-stop was first patented. This helped skaters stop promptly just by tipping the skate onto the toe. ( I personally never used a toe-stop, they were too big for me and got in my way. I used a small toe plug). But, toe-stops are still used today.

Too bad Joseph Merlin didn’t have a pair of toe-stops or toe-stop plugs on his skates that memorable night in London…right!

Roller skates were being mass produced in America as early as the 1800’s, the sport’s first of several boom periods. Just before World War II, in 1937 a group of rink owners formed the Roller Skating Association (RSA) to promote roller skating and establish good business practices for rinks.

During the 1940’s, 1950’s and 1960’s roller skating continued to increase in popularity. It become known as a family activity that everyone could enjoy. This still holds true today.

In the 1970’s there was a huge improvement in roller skating. Skating floors became easier to care for because of plastic coatings. Plastic skate wheels were developed for smoother, easier, safer skating. The music and lighting at the rinks became more modernized. By 1977, everyone was suddenly skating to disco music. 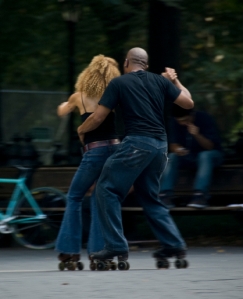 Roller skating continued to experience a boom from the mid 1980’s to the mid 1990’s. It was a glorious decade of roller-utopia. Roller skating took somewhat of a nose dive at the end of the 20th century, but it is currently on an upward rise in popularity, due to roller derby and jam skating.

So the next time you put on a pair of roller skates don’t forget that you are a part of a culture and a legacy that’s well over 265 years old. Lace up your skates, my friends and…roll bounce, baby!

4 comments on “Roller Skating : Past & Present”

This entry was posted on April 24, 2014 by lacesandwheels in Uncategorized.